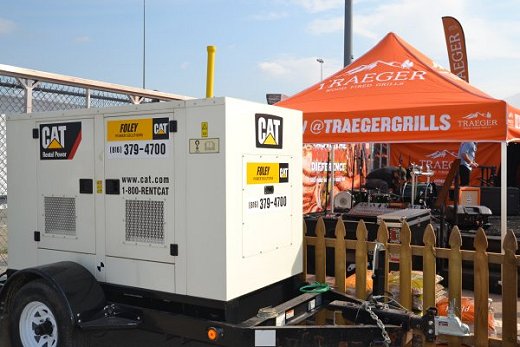 “We supply all the generator sets and temporary distribution gear to all of the contestants at the barbecue event,” said Gary Miller, Rental & Used Power Sales Manager for Foley Power Solutions. “All of the teams have their cooking utensils and all of their accessories, and they need electricity so we provide generators and all the distribution gear so people can feel like they’re at home and can plug right in and run whatever kitchen tools they need to run.”

Foley Power Solutions provided 26-27 Caterpillar generators, a couple spare generators, four 30-ton Caterpillar air conditioners and around 80,000 feet of cable to this year’s American Royal World Series of Barbecue, which is the largest entertainment event that the company provides power to.

“We have been powering this event since the early 90s,” Miller said. “It’s been a very long term mutual benefit for both of us. We even make suggestions on their layout, because we know what gear we have and how we’re going to power it, so we work together.”

When getting prepared to power a large event like the American Royal World Series of Barbecue, Foley Equipment checks the machines and changes the fuel filters to make sure that everything is clean and ready before the event begins. The equipment was delivered on the Monday morning before the event, and the power distribution team set up and tested the equipment.

“My lead salesman for this event, Jeremy Rock, gets here in the morning and starts labeling every generator and every distro box on where it has to be on this property,” Miller said. “That way when the volunteer team comes to help set up the distro gear, they know exactly where to take it to.”

“You can’t host a successful BBQ without a reliable electrical team,” said Brady Madsen, Director of Operations for the American Royal Association. “Jeremy Rock and the guys at Foley are there for us from the time we begin laying out the electrical map through the end of the event. This is the world’s largest barbecue, and we are able to execute the event successfully because of the support of partners like Foley.” 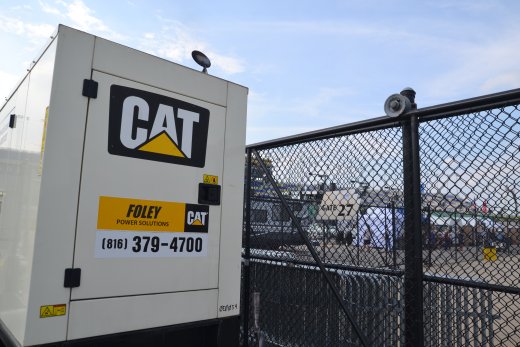 Some of the specific things that Foley Power Solutions powered for the event include video boards for concerts, air conditioning for a large garage being used as a judging station and barbecue contestant tents.

For the large stage in the center of the Winner’s Circle, Foley Power Solutions powered the stage and contestant area, as well as the private air-conditioned restroom, using about 350 amps of power.

“For another tent, we’ll provide them with a 45kw generator with power distribution,” Miller said. “We’re giving them about 150 amps of power to supply everything that’s going on in their tent. There will be freezers, refrigerators, their serving platform and all the serving warmer tools they need to feed their guests. Of course, they’ll have all kinds of electronics and lighting and they’ll have some type of band playing. It’s amazing because the tent is probably 60×100 [feet], and they’ll have probably a couple hundred guests. And that’s just one of the parties that’s going on out here.”

For safety reasons, Foley Power Solutions made sure to keep cables out of the way of event attendees by using cable ramps. According to Miller, an 80,000- pound semi could go over the cable ramps, and it would not affect the cables inside.

“If we have to run cables across a walkway, we will lay down our cable ramps and put the cables inside,” Miller said. “That way, there’s no chance of someone catching a cable and falling and hurting themselves.”

On the Monday after the event ended, Foley Power Solutions collected the generators and other equipment to move on to the next job.

“I’ll have a team of probably six people out here, and we will be gathering up our cables and generators and getting them shipped back to the shop,” Miller said. “In some instances, we’re having them sent directly to the next job. A technician will go out there and change fuel filters before that next job starts.”