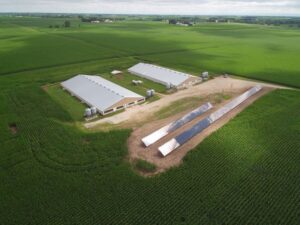 As utility bills skyrocketed for Sitruc Farms LLC, owner Steve Rathe began seeking out affordable alternative power sources. Over 800 photovoltaic panels capable of producing 131.3 MWh per year were installed. An agreement with local utility company Alliant Energy, Sitruc Farms was able to net meter its utilities, lowering overall costs. In addition, by drawing power from the local grid, the site’s electric meter is able to uniquely power itself throughout the day and night, as well as during severe weather.

The Rathe family has been in the agriculture business for nearly 140 years. Today, Steve Rathe and his partners oversee about 30,000 hogs across six sites near Waverly, Iowa. As an owner of Sitruc Pork LLC, Rathe relied on the local utility and backup generator sets to power his operations at one of these sites.

With utility bills around $1,200 to $1,500 a month, Rathe started looking for alternative power sources as a way to improve efficiency and reduce costs. Solar power is becoming increasingly accessible and affordable, especially in Iowa where tax credits and incentives are encouraging more companies to choose renewable energy sources and reduce emissions.

“The incentives make it feasible,” Rathe said. “[This solar power installation] should pay for itself in six to seven years, so after that point in time, I will be insulated from increases in utility costs.”

To bring solar power to his hog farm, Rathe was referred to local energy consultant CurrentRE. CurrentRE has been working on solar projects for commercial and industrial sites in Iowa since 2011, providing everything from design and engineering to installation.  “We consider commercial and industrial part of our core businesses, which includes agriculture applications,” stated Derek Sadler, cofounder of CurrentRE. The company works with farms and businesses to offset energy usage and provides assistance with capturing the maximum amount of incentives available.

For this project, CurrentRE was looking for a new solar panel provider when they were introduced to their local Cat dealer who has been supplying Caterpillar equipment for more than 50 years in Iowa and had recently began selling Cat hybrid power solutions, including solar panels. Looking to break into the industry, the two companies joined forces on the Sitruc Pork project to introduce Cat solar panels to the agriculture market.

“It became pretty obvious that CurrentRE and Caterpillar have very similar business models in terms of taking care of customers,” said Marc Kocina, electric power sales manager at the local Cat dealer. “There are many efficiencies in understanding utility interconnections and knowing how to maximize a customer’s particular project.”

Cat supplied the equipment and CurrentRE installed the more than 800 photovoltaic (PV) fixed, ground-mount solar panels at the Sitruc site with a 7.7 kW inverter, able to produce approximately 131.3 MWh annually. “The Caterpillar umbrella has a good impact as far as reliability and standing behind the product,” Rathe said. “If there are any concerns with the product, our Cat dealer will be there to take care of it for the long haul.”

The local utility company, Alliant Energy, allows solar projects up to 1 MW to be connected to the grid and up to 85 percent of utility use can come from the solar power. Sitruc made an agreement with Alliant to net meter its utilities to help lower overall utility costs. Net metering allows the site’s electric meter to run backwards during the day while solar energy is being produced and then run normally at night or during times of unfavorable weather conditions as the farm gets its power from the local grid.

“You have a utility interested in taking solar renewable energy and a facility with a load that matches that delivery,” Kocina said. “So there are many different factors playing together to make this an interesting project.”

With the addition of solar panels, Sitruc expects more than $1,300 in monthly utility cost savings. The Cat solar panels have a performance guarantee for 25 years, so Rathe is hoping the $200,000 investment up front will pay off for his family thanks to the significant utility cost savings.“Hopefully in time, [solar] will give my kids a better asset down the line,” said Rathe. “They’re going to have an asset that pays for itself if they don’t have to pay a big utility bill.”

Since installing the solar panels at the one site, Rathe is commissioning installations for some of his other hog sites. The Sitruc project also sparked an ongoing partnership between Cat’s dealer and CurrentRE, who are continuing to work together on solar installations for agriculture, industrial and other businesses.

“It was a great kickoff project for us to see how the Cat dealer, as a distributor, and Caterpillar, as a module provider, would work together,” Sadler explained. “Not many manufacturers or panel providers have the level of engineering, background and support that Caterpillar provides. Whatever we needed, we had access to. So, we plan to use this concept and just repeat it over and over as we find new projects.” 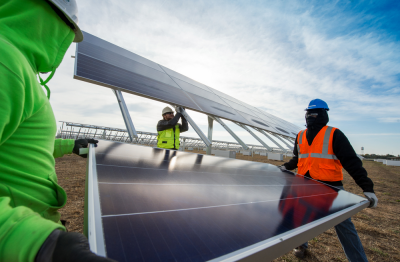 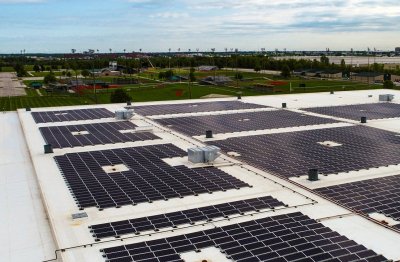 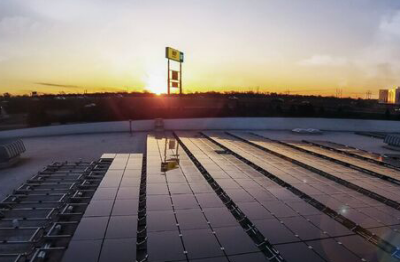 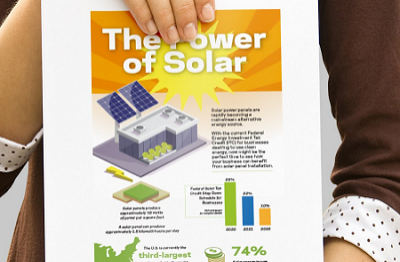